The Griggs machine works by forcing a cylindrical piston into a cylindrical hole in a pressure vessel (also known as a “bomb”). The pressure piston contains a second, smaller piston that can move independently (driven by the gear train at the top of the press) which allows the sample to be deformed.

The sample assembly for the Griggs Machine consists of a series of nested cylinders. The outermost cylinders consist of soft materials (salt and pyrophyllite) that transmit the confining pressure to the sample. Within them there is a cylindrical graphite furnace and more soft confining media. The sample sits at the center. Above and below the sample are hard alumina pistons that are used to transmit the stress to the sample. A thermocouple monitors the temperature at the sample. The diagram below shows the sample assembly design Pamela used while working on her PhD with Harry Green. 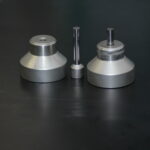 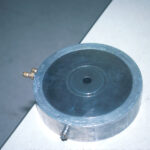 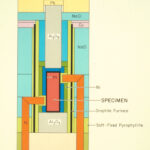 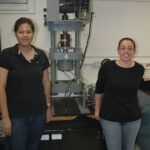 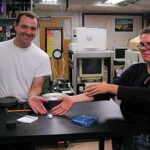